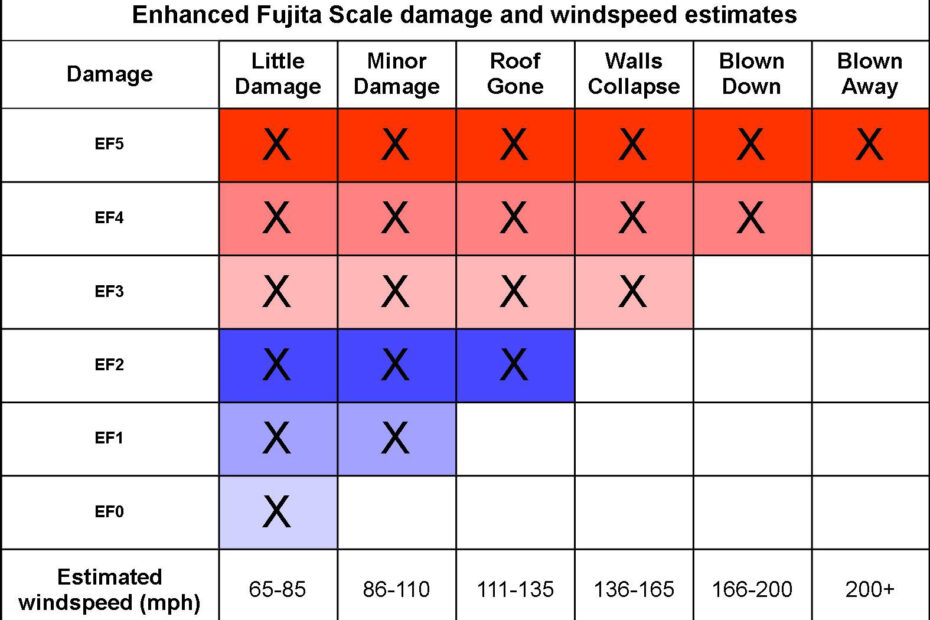 Decades of Research Change the Understanding of Storm Damage

Those in Tornado Alley are probably quite familiar with the Fujita Scale; it has also become the de facto standard for classifying tornado intensity in most regions of the world. Work on a system to gauge winds in these storms was initiated by University of Chicago professor Tetsuya “Ted” Fujita and Allen Pearson.

Fujita’s aim was to give damage surveyors a system from which they could devise the strength of winds based on damage to objects and structures. He debuted the scale in 1971, but it was devised without much research into the relationship between wind intensity and damage.

This was not the only problem: the basis of Fujita’s intensity estimations left a lot of room for subjectivity. Simply put, several researchers at the same scene may come up with several different estimations of intensity for the same tornado.

Researchers decided around 2000 that a new system was necessary, and began to pore through over three decades of research following Fujita’s initial work.

The Enhanced Fujita Scale takes into account expert analysis on damage to various structures and objects based on different wind speeds. While not perfect, the estimated wind speeds likely come a lot closer to reality than those deduced from the older scale.

Assisting researchers in making more precise estimates are more “degrees of damage” to more types of structures and objects than the old Fujita Scale, which gives more data points for researchers to make determinations from.

Old Fujita and Enhanced Fujita are Similar, but Different

At the lower ends of either scale, the intensities are fairly similar. Both still preserve the original six-step scale, going from 0 to 5. But the changes in the wind speeds reflect the advancements in the understanding of tornadoes themselves and the damage they can incur. It should be mentioned that the levels of damage have not changed: merely the winds associated with them.

At the two highest levels, the wind speeds are almost completely different. F4s have winds of 207-260mph, but EF4s have brought that wind speed down to 166 to 200mph. At F5, its dramatic: those were thought to have winds of over 260mph, but now forecasters believe the strongest tornadoes usually have winds closer to 200mph and above.

Old Tornado Intensities Will Not Be Changed

The NWS has said it would not change the intensities of twisters that have been rated under the old system. It did say that in some cases, some of the stronger storms may have not been as intense as originally suspected, however.