The Physics of Hurricanes 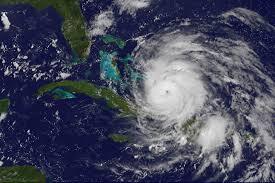 Hurricanes, which are also known as typhoons in Asia, and are more properly called tropical cyclones, are amongst the most damaging and deadly natural phenomena. Recent years have seen an increase in tropical cyclone activity, due in part to a natural cycle of activity, but likely due to global warming as well. Warm tropical water is key to the formation of tropical cyclones.

Tropical cyclones typical form in the ocean about 5 degrees from the Earth’s equator over water heated to about 26 degrees Celsius to a depth of about 50m, though tropical cyclones can form elsewhere. In 1996 for instance, a tropical cyclone briefly formed over Lake Huron in the middle of North America.

Typically though, tropical cyclones require the coriolis effect in order to form, which gives the storm it’s rotation. This effect is greatest nearer the equator. Cyclones also require low wind shear to form, meaning that wind speeds and directions close to the surface of the ocean aren’t much different from wind speed and direction higher in the atmosphere. High wind shear will tear a storm system apart.

The interior of a forming cyclone is like a huge heat engine. Warm surface water evaporates and rises as moist air high into the atmosphere. As it reaches the top of the troposphere, the layer of the atmosphere in which weather takes place, the moist air condenses. This converts heat to a tiny amount of mechanical energy. This mechanical energy adds to a down draft of wind on the outside of the system, which falls to the ocean surface and helps to pick up more moist air. This starts a positive feedback loop that helps to increase the formation of the system.

Tropical cyclones actually help to cool the ocean by drawing heat out and converting it into mechanical energy (wind). They can carry this energy pole-ward, so that along with ocean currents, no one area of the ocean becomes over heated. Even this balance is limited. As the overall amount of energy in the Earth’s atmosphere increases, more and more tropical cyclones will form.