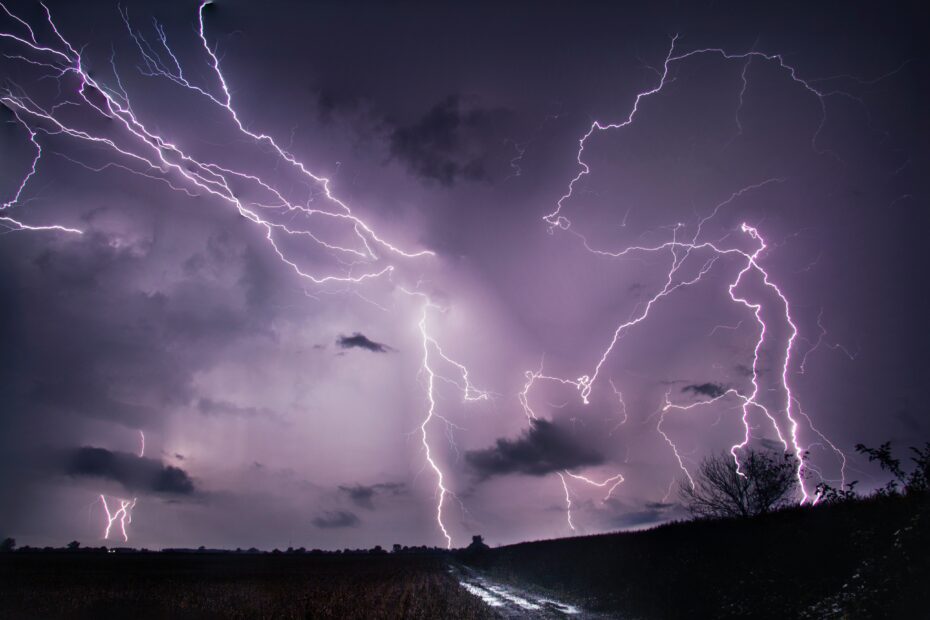 Thunderstorms, or lightning storms are one of the most common weather phenomenon in the world. It is estimated that nearly 1,800 thunderstorms are in progress around the world, at any given time. Thunderstorms form when warm air rises quickly into the colder, higher levels of clouds. This unstable atmosphere creates rapid updrafts. The air lifted into the clouds, cools and moisture condenses. These storms can vary from mild to extremely damaging, with high winds, hail and even tornadoes.

The National Weather Service has identified four types of thunderstorms.

Lightning happens within a thunderstorm, transferring between clouds, called in-cloud lightning. The friction of moving air and water droplets within the thunderstorm creates electrical charges, both negative and positive. The differences in charge cause lightning.

Lightning strikes happen when the negative charge is large enough to cause a passage to the positively charged ground below. The negative charges group in the lower part of the cloud. These charges send out a feeler to the ground, called a stepped ladder, invisible to humans. The positive charges of the ground reach up. When these charges meet, a channel is made with a flash, as the visible lightning bolt strikes, usually composed of several short bursts.

How Close is the Lightning?

As light travels faster than sound, it is easy to calculate the distance to the lightning. As soon as the lightning appears, count the seconds until the thunder is heard. Divide this amount by 5. The number is the approximate distance in miles away from the lightning.

With satellite surveys of thunderstorms, meteorologists can observe and identify areas of the world with the most severe and frequent thunderstorms. A study by the American Meteorological Society in 2006, found the strongest storms to occur east of the Rocky Mountains in the United States and east of the Andes Mountains in Argentina, where geography plays are part in storm formation.